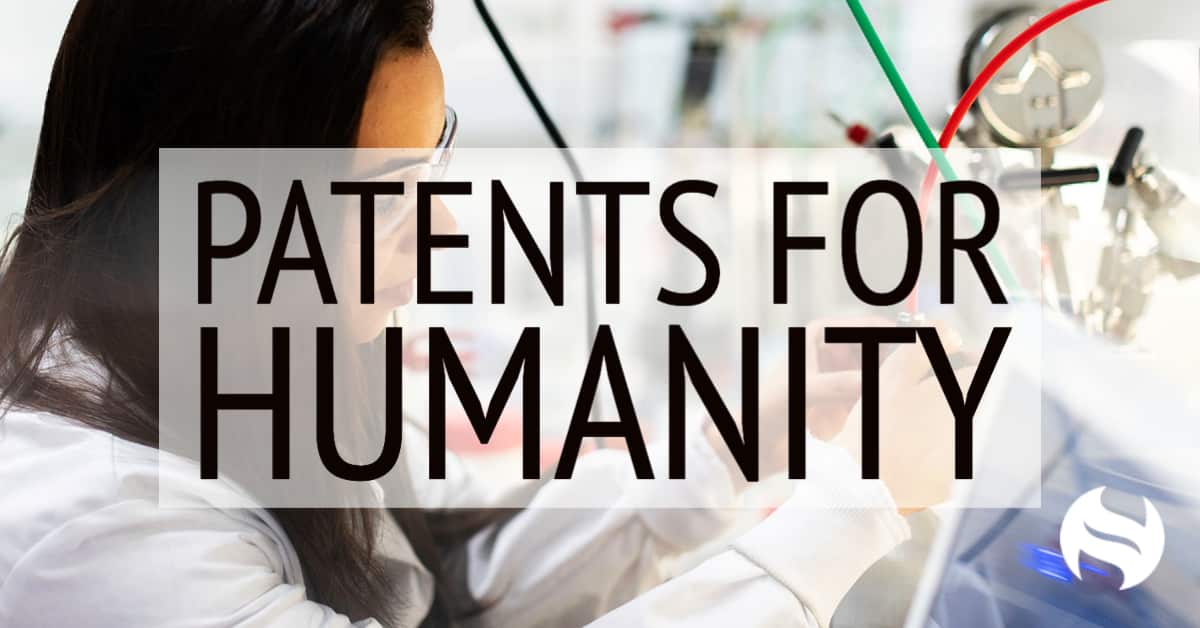 Some time ago, in discussing humanitarian efforts and engineering, a friend of mine told me about a concept project he worked on to create a new iteration of the Leveraged Freedom Chair (LFC), an all-terrain wheelchair manufactured by Global Research Innovation and Technology (GRIT).  The original LFC was created by engineering graduates of the Massachusetts Institute of Technology (MIT) to allow people with disabilities in developing countries to gain mobility and independence.  Conventional wheelchairs didn’t function well on the rugged terrain and rough local roads, and most were difficult and expensive to maintain.  The three-wheeled LFC uses a push-lever drivetrain to help people navigate over rugged terrain with ease and is built from commonly found bicycle parts to allow easy maintenance and repair.  Naturally, being an intellectual property professional, I started looking into patents related to the LFC.

That’s when I first discovered Patents for Humanity, an awards competition hosted by the United States Patent and Trademark Office (USPTO).  The creators of the LFC secured US Patent No. 8,844,959 in 2014 and was awarded a Patents for Humanity award in the subsequent year.  Nearly a decade has passed since the program itself started, but little is known about it.  Given the current situation with the global pandemic, and the season of giving around us, I thought it might be timely to share some information about the awards competition with our network of IP professionals.

Patents for Humanity was launched in February 2012 as part of an initiative to promote “game-changing innovations to address long-standing development challenges” and showcase how patent holders are pioneering innovative ways to provide affordable, scalable, and sustainable solutions for the less fortunate.  Awards have been given for innovations that range from Golden Rice that’s genetically enhanced to provide a source of vitamin A for people relying mainly on rice to the LFC to compact human wastewater converters called NEWgenerator.

Two types of awards are given – Patents for Humanity awards and Honorable Mentions awards.  Patents for Humanity award recipients are given an acceleration certificate, and of course, public recognition of their work at an awards ceremony sponsored by the USPTO.  The certificate can be used to accelerate a patent application examination, ex parte reexamination, and ex parte appeal to the Patent Trial and Appeal Board.*  Honorable Mentions award recipients receive accelerated examination of one patent application but not other types of matters.

The program is open to patent owners, applicants, licensees (including inventors who haven’t assigned their ownership rights to others), assignees, and exclusive and non-exclusive licensees.  Applicants must describe how they’ve used their patented technology or products to address a humanitarian issue, which, for the competition purposes, is defined as “one significantly affecting the public health or quality of life of an impoverished population.”

Applicants using a patent application as a basis for entry to the competition must show that a Notice of Allowance for one or more claims from that patent application has been issued before any certificate is awarded.  Applicants mainly compete in the following five categories:

Applicants may also team together to submit joint applications explaining actions taken by multiple parties.  However, only one certificate will be issued to the joint applicants, and the certificate can be redeemed for only one matter.

The applications are reviewed and scored by qualified judges outside of the USPTO, and the USPTO forwards the top-scoring applications to participating federal agencies for award recipient recommendations.

As we prepare to bid farewell to a year that will live in infamy, I think it’s fitting to recognize this year’s award recipients: Global Vision 2020; Sisu Global; Sanaria Inc; Flexcrevator; NEWgenerator; Nonspec; Rubitection; and Lawrence Berkeley National Laboratory.  Congratulations!  Perhaps, now more than ever, we need and should honor more innovation that makes progress in human lives.  Keep an eye out for the next awards competition application period.

More information about the Patents for Humanity awards competition can be found at:

*Inter partes matters and other post-grant proceedings may not be accelerated with the certificate at this time.