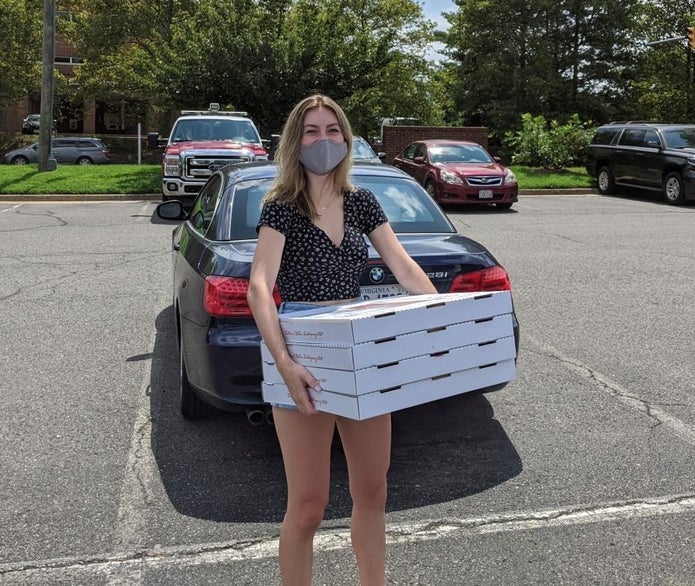 CENTREVILLE, VA (The Patch)— The Harrity family had faced a similarly scary situation four years earlier when John Harrity was rushed to the hospital with what turned out to be a major heart attack. In late April, Harrity’s 17-year-old daughter Jorden Harrity suddenly fainted in the early morning hours, bringing back memories of 2016. Her parents called 911, and she was rushed to the emergency room.

The doctors at the hospital ran a bunch of tests but could not find any major issues with Jorden. While everything worked out for the teen who will be a senior at Centreville High School, she started thinking about the firefighters and EMTs like the ones with the Fairfax County Fire & Rescue Department who helped her.

Jorden wondered why they were not necessarily receiving as much attention as the hardworking medical teams at hospitals who are also risking their lives helping COVID-19 patients. She told Patch that she believed first responders also deserved recognition for the risky work they do on a daily basis.

As a way to show her gratitude for taking her to the hospital — and remembering how EMTs rushed her father to the hospital four years earlier — Jorden came up with the idea to deliver pizzas to the fire station where the firefighters and EMTs worked.

Harrity delivered her first pizzas last Friday to the Fairfax County Fire & Rescue Department in Centreville to thank them for helping her back in April.

Capt. Kenneth Dobbs at the Fairfax County Fire & Rescue Department said he appreciated Jorden delivering the pizzas in person. EMTs often do not know what happens to the people who they help. “The fact that she was able to walk in here, say thank you to us and bring us pizza,” he told WDVM. “It just means a lot to us and our crews.”

Jorden also approached her dad, managing partner of Harrity & Harrity law firm in Fairfax City, with an idea to not only thank the men and women at the Centreville fire station but to honor the nearby fire stations for each of the 56 employees of his law firm, who not only live in Virginia, but in more than two dozen other states.

After his near-death experience in 2016 at the age of 49 from a “widow-maker” heart attack, Jorden’s father, John Harrity, ramped up his charitable efforts. His Fairfax City law firm, Harrity & Harrity, was already known for its giving, whether it was through its participation in the annual Lawyers Have Heart race in Georgetown that raises money for the American Heart Association or local charities.

Since his near-death experience, John Harrity and his brother and law firm co-founder Paul Harrity created the Harrity 4 Charity that gives five percent of the law firm’s profits to charities. Law firm employees also donate a portion of their paychecks to charity. In addition to the charities, Harrity also created an emergency COVID-19 fund.

Jorden, who is a member of service clubs at Centreville High School, said her father’s efforts since his heart attack have inspired her to help others. She told Patch about her new appreciation for the value of community service and plans to continue working to help others during her senior year and when she heads off to college in the fall of 2021.

Harrity 4 Charity represents a partnering of law firm Harrity & Harrity, LLP, with charities that are near and dear to our hearts. Harrity pledges to give five percent of profits to partner charities and all Harrity employees pledge to donate a portion of their paychecks. Harrity & Harrity is a patent preparation and prosecution firm specializing in the electrical and mechanical technology areas and is considered a Go-To Firm for the Patent 300 ™. Our clients have come to trust in our high-quality work, experienced people, industry leading innovation, and outstanding service. For more information, visit harrityllp.com.