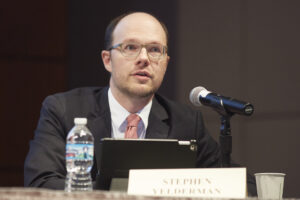 Prof. Yelderman insights are not to be missed by anyone who is interested in having a better understanding of how the Supreme Court approaches IP issues, how the patent system truly works, and how to succeed in the legal field.

“A piece of advice I have is when an opportunity comes, say yes to it because you oftentimes don’t have good visibility to all the doors that will open down the road.”