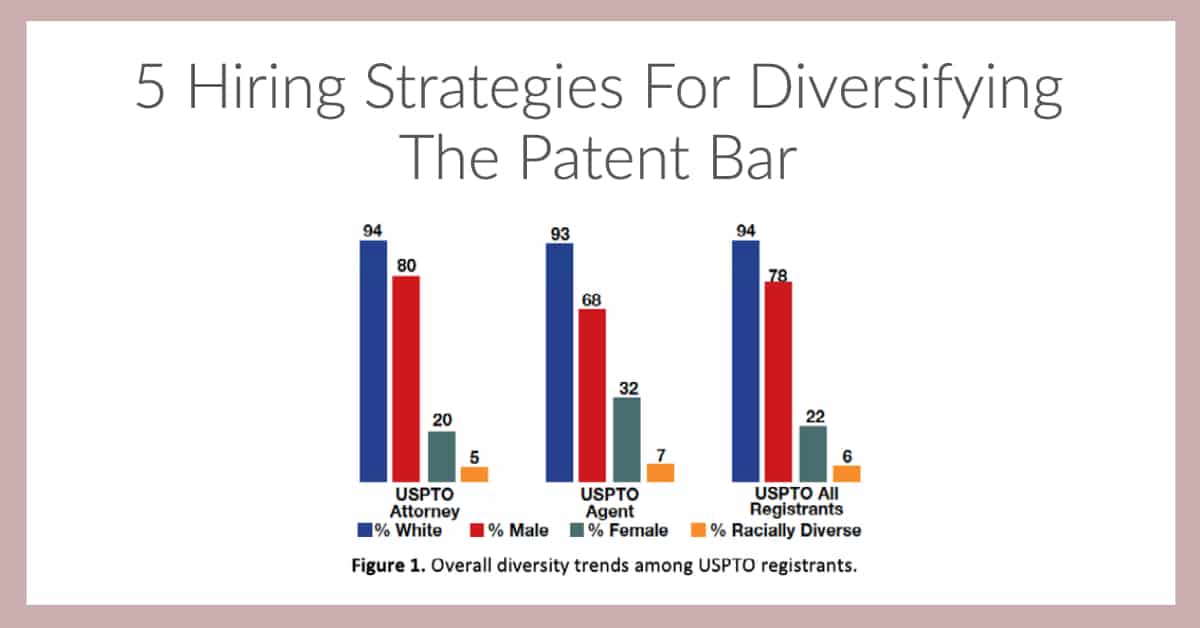 Law360 (March 1, 2021, 5:19 PM EST) —  Diversity and inclusion have garnered much attention over the past few years, particularly in the field of law, which is one of the least diverse professions in the U.S.According to the 2019 Law Firm Diversity Survey by Vault and the Minority Corporate Counsel Association, over 80% of lawyers in the U.S. are white.[1] Not only are men overrepresented in the practice of law, but they outnumber women in equity partner positions nearly 5-to-1. In addition, around 90% of equity partners are white, and approximately 9% of equity partners belong to minority groups with only one-third of them being women of color.

Diversity statistics become even more troubling when we examine patent attorneys. The patent bar requires a hard science background, such as a degree in engineering, chemistry, physics or biology; however, the science, technology, engineering and mathematics field has historically been dominated by men, who, as of 2017, accounted for 76% of all STEM jobs, according to the U.S. Department of Commerce.[2] 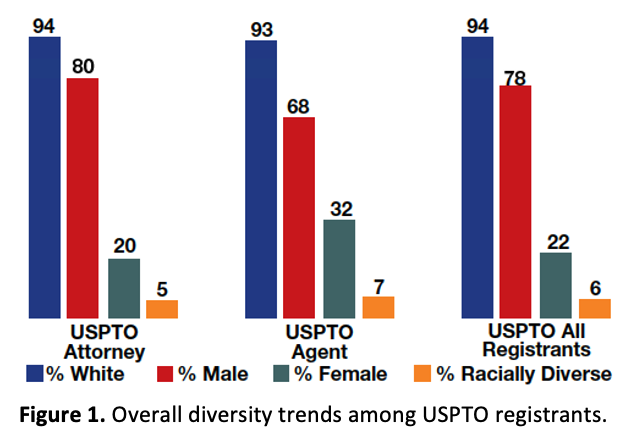 For patent firms seeking to increase diversity in their practice, existing diversity data is problematic. For starters, 94% of the patent bar is white, as seen in Figure 1 above.[3] In addition, less than 15% of registered practitioners are women, people of color and members of the LGBTQ community in the areas of computer science, electrical engineering and mechanical engineering.

As registered patent practitioners move along their career paths, there is inevitable attrition, as reported in the Vault/MCCA Law Firm Diversity Survey report. Accordingly, it will be difficult for firms practicing in the areas of computer science, electrical engineering and mechanical engineering to improve their diversity numbers, particularly at the partnership level, given that the diversity numbers are so low before adjusting for attrition.

Diversity of the patent bar is not only important to those practicing in this profession, it is essential for broadening participation in the innovation process by underrepresented groups.

Innovation by underrepresented groups will start to improve when they can go to patent attorneys who understand them, who look like them, and who can relate to them. Improving the innovation ecosystem to include all groups of people will foster a more robust economy.

Despite the lack of diversity of the patent bar, an intellectual property boutique can increase diversity by first examining its hiring practice. For example, a rule similar to the NFL’s Rooney Rule can be implemented.

According to the Rooney Rule, for each new head coach position available, at least one candidate from an underrepresented group must be interviewed. In essence, to meet the requirements of the Rooney Rule, just one candidate from an underrepresented group would need to be interviewed for a position among a limitless number of other candidates.

This rule has been instrumental in increasing the diversity of applicants and, in turn, hires at my firm. In January 2016, prior to implementing Rooney Rule 2.0, 8% of my firm’s attorneys were women, attorneys of color, LGBTQ+ lawyers and lawyers with disabilities. Today, 30% of our attorneys belong to those groups, nearly quadrupling our diversity numbers in five years through the implementation of just one policy.

If your firm is serious about increasing diversity, revisiting your hiring practices is a vital place to start. Here are five key hiring strategies to increase diversity at your firm.

1. Increase the pool of candidates from underrepresented groups to be considered.

As discussed above, implementing Rooney Rule 2.0 will help increase the pool of candidates from underrepresented groups considered. While rules like the Diversity Lab’s Mansfield Rule have become popular over the last few years, it is exceedingly difficult to fill equity partner and leadership positions when there is not a proper base of lawyers from underrepresented groups to consider for the role.

By comparison, Rooney Rule 2.0 requires a 1-to-1 ratio of attorneys belonging to these groups and those who do not interviewed for positions at every level, rather than just leadership roles. This creates a larger pool of candidates from underrepresented groups at earlier career stages, allowing individuals from these groups to gain the necessary experience to eventually secure a role in leadership, and firms to have more success in achieving Mansfield certification.

By implementing policies like Rooney Rule 2.0, firms can significantly increase the number of applicants from underrepresented groups considered for a position, thus increasing the number of such candidates hired at the firm and those eligible to fulfill the Mansfield Rule.

2. Prepare a job posting to attract candidates from underrepresented groups.

In 2017, I came across a job advertisement for my firm that included the words “reduced hours available,” and “flexible schedule.” As a working mom, it was that very language that got my attention and ultimately persuaded me to leave an in-house position and return to private practice. It is also important to highlight reduced billable hour requirements, or elimination of such requirements, in job postings.

A simple advertisement to recruit women and minority candidates may read, “Remote Work, Flex Hours, Great Firm Culture.” You can also include information related to work-life balance, such as, “Work where you want, when you want, and how much you want,” or represent your firm’s culture by adding highlights, such as, “Casual culture, flexible schedules, positive people, supportive leadership, and a focus on giving back.”

Simply including words like “inclusive,” “people-oriented,” “friendly” or “forward-thinking” can also convey a welcoming message.

To garner the most attention from women and minority candidates, share videos created by your own employees discussing reasons why they love working at your firm. If these candidates can visibly relate to your employees, the wording of the posting will resonate with them that much more. After all, your job posting needs to be a reflection of the candidates you want in the role and show if your firm is inclusive.

I highly recommend revamping your interview process by migrating to the topgrading methodology.[5] In this method, interviewers ask all candidates the same questions — questions that are very specific to their job tasks and responsibilities. The interviews are immediately documented and scored by interviewers.

All interviewers can be trained specifically in this technique. Having a structured interview minimizes “bias by allowing interviewers to focus on work competencies rather than on what they have in common with the person being interviewed,”[6] as noted in the Intellectual Property Owners’ Association’s Practical Guide on Diversity and Inclusion. The guide further recommends including underrepresented minorities in the interview team.[7]

4. Include a component of blind hiring.

Blind hiring can be an important aspect of your application process when it comes to skill evaluation. Your firm may decide to require candidates to partake in a testing phase, such as submitting a writing sample or taking a writing test, as writing is an important part of a career in patent law. A candidate’s performance on such tests may be a crucial determinant in whether the candidate will move on to the next step of the job application process.

There is no question that many interviewers have implicit biases. Implementing a component of blind hiring addresses any biases, unconscious or otherwise, when evaluating any skills-based test.

In the area of patent law, tests can be administered to evaluate skills related to either drafting a patent application or responding to an office action. A mediator, who first receives the test, can assign an anonymous identifier to the candidate, replacing all identifying information on the submission. Evaluators can then be sent the writing sample without reference or access to any information on the writer of the sample.

Often, gender and race can be assumed from a person’s name, and additional information such as location, education and previous employers can carry other assumptions. This strategy will help to eliminate any implicit bias that may occur at one of the most critical steps in an interview process and will ensure that candidates move forward based only on their qualifications, rather than an interviewer’s preconceptions.

While skills-based tests are a great way to objectively screen potential candidates, measures such as anonymization must be taken to ensure the test grading is truly objective.

The legal community needs to recognize the importance of creating an unbiased, equal and harmonious working environment for all legal professionals. Unfortunately, the lack of diversity is widespread in the legal field, and the numbers show the industry is moving at a slow pace to address the issue.

To truly move the needle, firms will need to develop programs to specifically increase the diversity of the patent bar from 80% white men to a breakdown more representative of the population as a whole, as well as enhance existing female and minority practitioners’ quality of practice in patent law. This may include free mentoring, tutoring or interning programs, and a focus on both current practitioners and students as young as middle school in order to garner interest in joining the field.

Whatever program your firm creates, it should focus on giving back by providing more resources and opportunities to diverse individuals and give representation to currently underrepresented groups. Not only will such programs contribute to moving the needle with respect to diversifying the patent bar, they will also draw candidates from underrepresented groups to your firm.

Elaine Spector is a partner at Harrity & Harrity LLP.

[3] “Diversity in Patent Law: A Data Analysis of Diversity in the Patent Practice by Technology Background and Region,” Landslide Magazine (September 2020).