Big head, long tail.  This isn’t the description of an exotic animal, rather it describes the automotive sector of the Patent 300™.  The top 25 auto companies and parts makers obtained more than 14,000 utility patents in 2018, but the top five obtained 60% of them. 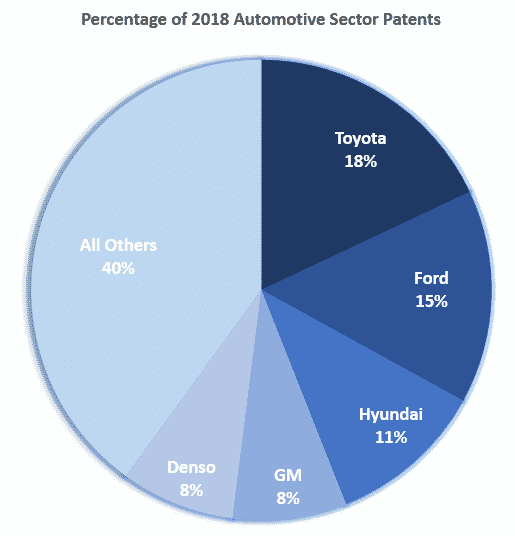 The report, which details the top 300 companies, organizations, and universities receiving utility patents in the U.S. last year, shows that the top 25 companies in the automotive space were awarded patents in a variety of areas, from the expected (Surface Transportation for Honda, Ford and GM) to the unexpected (Wells, Earth Boring/Moving for BMW, Magna and Schaeffler).

Toyota leads the pack with 2,554 patents obtained in 2018.  It is the No. 6 company in the Patent 300™ overall and has a leading position in several patent areas. The Japanese car maker is No. 1 in both Computerized Vehicle Controls and Fuel Cells and Batteries. It holds the No. 2 position in three areas: Surface Transportation; Material and Article Handling; and Static Structures, Supports and Furniture. It ranks No. 4 in Thermal & Combustion Technology, the area where it holds the highest number of its 2018 patents.

Ford is in second place with 2,149 patents and bests its rival, Toyota, to hold the No. 1 spot in both Surface Transportation and Static Structures, Supports and Furniture.  It holds the No. 2 spot in Computerized Vehicle Controls and in Vehicles and System Alarms.  It had most of its 2018 patents in Thermal & Combustion Technology, where it holds the No. 3 spot.  It is No. 15 overall in the Patent 300™.

South Korean car maker Hyundai rounds out the list at No. 3 with 1,539 patents.  It holds the No. 1 position in Material and Article Handling, the No. 3 position in Computerized Vehicle Controls and the No. 5 position in both Surface Transportation and Thermal & Combustion Technology.  Hyundai sits at No. 22 in the Patent 300™.

Those who follow the automotive field will recognize that the car makers’ rankings in the top three mirror their positions in Computerized Vehicle Controls, an area that includes utility patents for things that can control the direction and speed of a car, and controls for autonomous vehicles.  This is no coincidence, as cars become more and more automated and as the market moves toward autonomous vehicles.

Parts manufacturers make up the other portion of the sector, including tire companies that are household names: Continental (9), Bridgestone (15), Sumitomo (16), and Michelin (23). These companies share top spots in the Tires technology area, including Sumitomo at No. 2, Bridgestone at No. 3, Michelin at No. 4.  In case you’re wondering, the No. 1 in this area, which includes adhesive bonding and plastic molding, is a company that tends to focus on much larger vehicles than others in the automotive space, namely Boeing, No. 32 in the Patent 300™.

The overall picture of the industry looks rosy, as car makers have obtained an increased number of patents year-over-year.  Toyota’s issued patents went up 41% from 2015 to 2018, and Ford, Hyundai, BMW and Mazda all experienced increases of more than 75% in the same period of time.